Lights, camera, savings! By making the decision to go with National LED, KTRK-TV invested in a long-term energy saving solution that transformed their studios and reduced their operating costs. 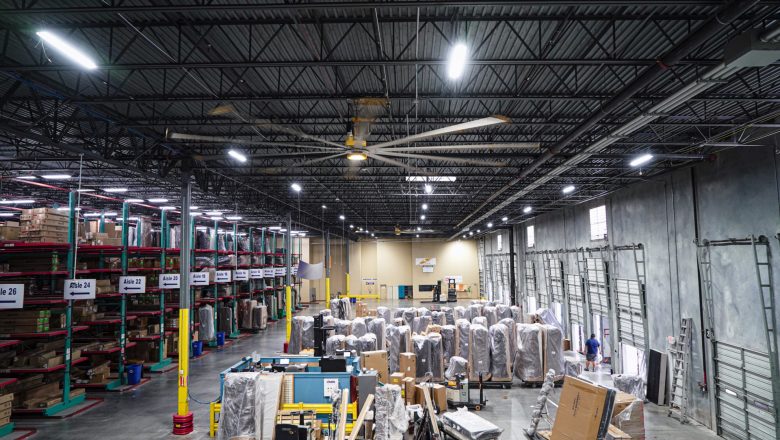 KTRK-TV is an ABC owned-and-operated television station (a subsidiary of The Walt Disney Company) that’s been proudly broadcasting in Houston, Texas since November 1954. Drawing from its early history in news coverage, KTRK-TV has had a heavy emphasis on reporting on local stories over the years and has built a reputation that’s highly respected in the community. Having popular personalities and some of the most experienced news teams has propelled KTRK-TV to much success in the Greater Houston market during its existence. As of 2020, KTRK-TV is the only major network affiliate in Houston that continues to occupy its legacy studios from the 20th century. So it’s no surprise when their Vice President of Technology and Chief Engineer was working on ways to implement improvements to their facilities to better serve their audience, they concluded that new lighting would be a major factor for operational efficiency. Over time, the existing fluorescent lighting in the studios, newsroom, offices, and common areas had suffered from a degraded performance or had completely malfunctioned. The newsroom especially was dark and a safety hazard when they weren’t on the air. KTRK-TV sought to find a reliable partner to retrofit the legacy lighting system to energy-efficient LED technology. What were their primary goals? Improve light levels, virtually eliminate maintenance, and reduce annual energy consumption. 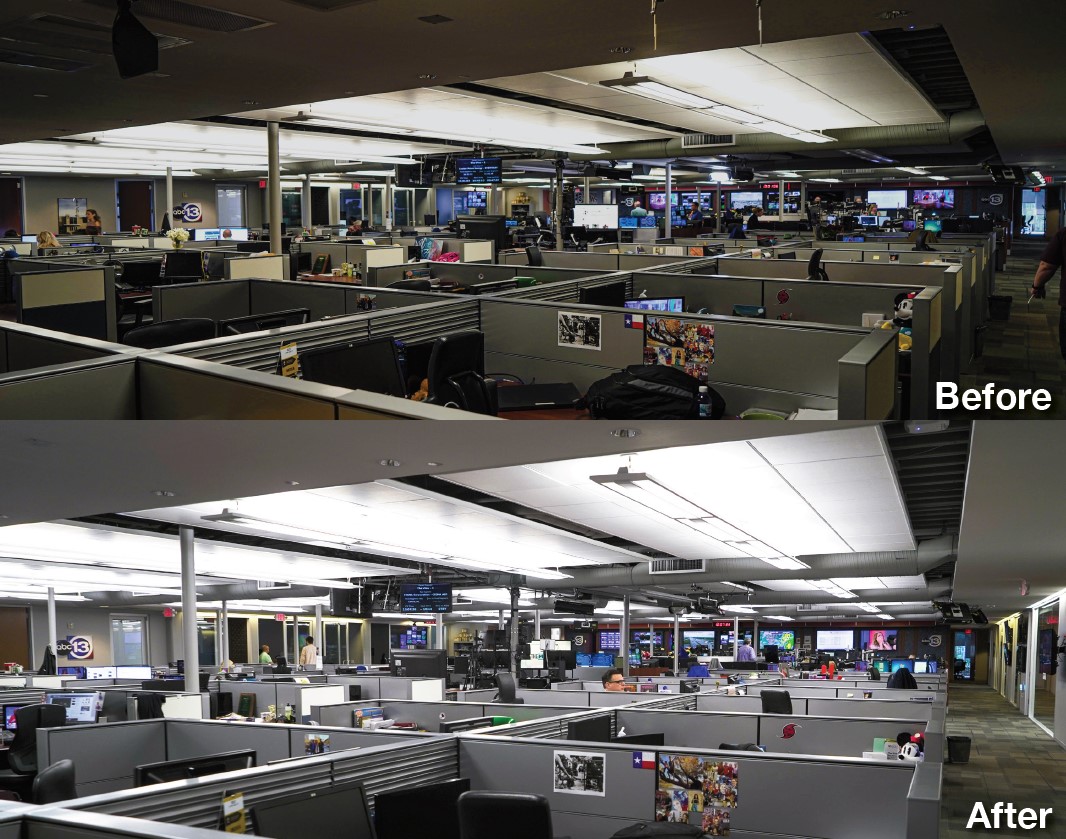 After vetting vendors, KTRK-TV chose to partner with the lighting experts at National LED, who is a Walt Disney Company-Approved Supplier. Working collaboratively, they created a lighting solution that would work best for the 66-year-old station with minimum interruption to operations. They chose to install US LED’s TDK LED troffer retrofit kit (30W each) in offices and the server room, the PJF1 LED linear strip (35W each) was used for common areas, and the DG2 LED linear strip (42W each) was used in the studios. Overall the team was able to replace over 840 fluorescent tube fixtures throughout the facilities with half as many LED luminaires. With improved illumination, ultra-long product lifetimes, and more footcandles hitting the ground, employees can see their tasks in greater detail while the company saves energy. The new LED luminaires also eliminatethe need for lighting maintenance and fluorescent tube disposal services. 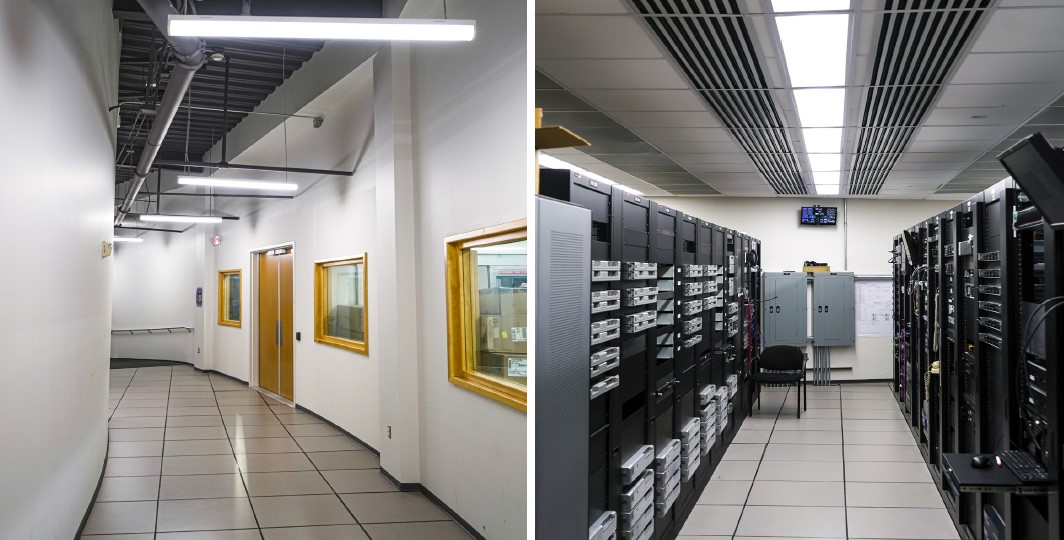 With their new lighting installed, KTRK-TV’s vision to be the best at delivering local news has never been brighter. The news studio is now properly lit regardless of when they are on-air or not, with 35+ footcandles hitting the ground. The improved quality of illumination has been received well by visitors and has made a noticeable impact on employee activity and morale. Prior to the LED upgrade, employees working in the newsroom or in other common areas had problems focusing on their tasks. KTRK-TV has now seen an increase in employee productivity because of the improved lighting and will benefit from a 70% reduction in annual energy usage affiliated with their lighting system alone. Thanks to ultra-long product lifetimes, the LED lighting system will perform at a high level for decades to come and eliminate all  maintenance associated with lighting so that staff can focus on other critical areas. As KTRK-TV’s growth as a news-focused organization continues, it is certain to build on the foundation it has established: a facility with leading-edge technologies and outstanding people with the talent and drive to be the best in the industry. 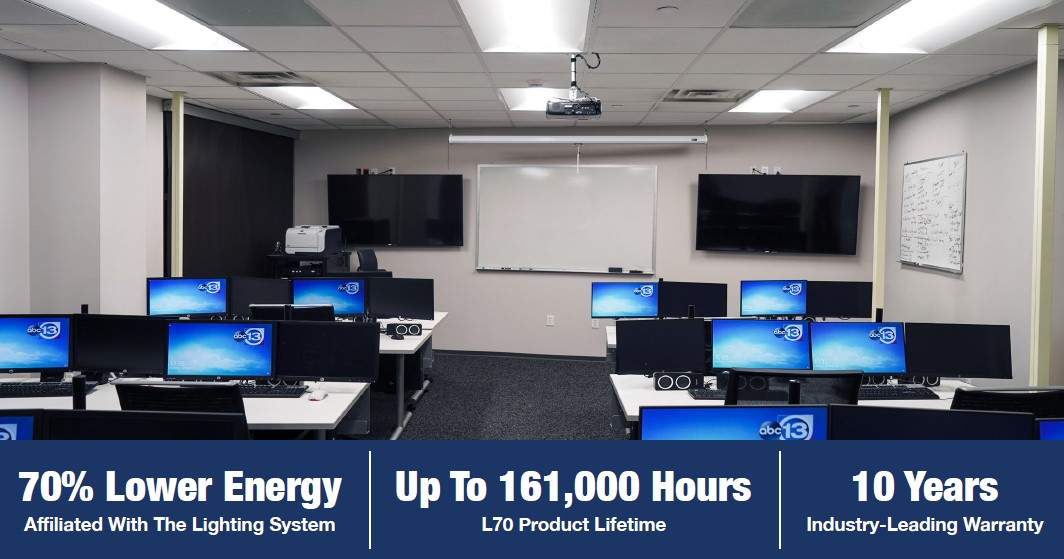